Still room in this world

My name is Aqil Rogers, and this year I served at Harrity Upper, a middle school in West Philly. As many of you also know, I’m a designer by schooling and a metalsmith by trade. I came into the year aiming to show students all about the broader world of design that came from my schooling, and of course, one of the ways I wanted to do that was through metalsmithing.

So you can imagine my excitement when, in the very first week, one of my students approached me about taking me up on my open offer to students to learn the ins and outs of my trade.

His name is Maurice. I remember learning that he loved watching kung-fu movies just like me, and that he had a lot of respect for wizened teachers of wing-chun, his favored martial art. I quickly hoped that I could be that for him, but with metalsmithing instead.
I’m sure he was not as amused as I was when I gave him the ol’ learning runaround, the kind that ancient martial arts masters did with their disciples. You know what I’m talking about – ‘do this seemingly mundane task a hundred times because it will teach you this vastly more important thing’. I can’t say I made a hundred cardboard rings before working with, metal, but…y’ know. Character-building is important.

After some time going through that – I swear actual things were learned in the process – Maurice finally reached a point where he had made his first pieces out of metal. They were awesome – one, a Punisher-style skull, and the other, a lightning bolt pendant that a character in a story he’s writing wears. 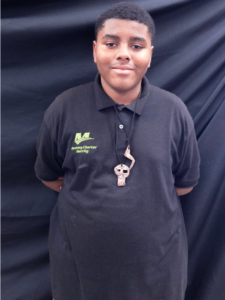 Now, when a piece of metal is done being heated via my technique, they’re covered in ash that needs to be brushed off in order to reveal the metal surface underneath. Maurice and I planned for us to go through this process one day during lunch. After brushing the ash off, Maurice then needed to properly sand the metal in order to reveal its most brilliant shine. But to my surprise, he told me that he wanted to pass on doing the sanding because he preferred the ancient look of the metal, which is not really typical. Guess who else prefers that look? Me! I was humbled. 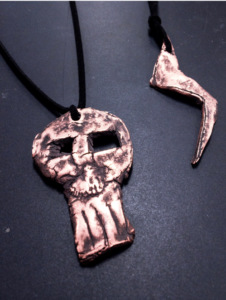 As we sat back and looked at the wire-brushed pieces, I remarked to him that I was pretty sure he was not just the first black kid, but the first kid in Philly to make something out of metal clay. He looked at me like he had just realized there was still room in the world to be first at something, let alone for a black kid. We both grew silent and just stared at what he had made for a bit. There were teary eyes involved.

It was in that moment that I realized I needed to tell him something I wish somebody would’ve told me: I told him to not stop at being first, ‘cause first doesn’t matter if you stop there. We both laughed because this was starting to look like one of those moments where martial arts master tries to push past what’s already been accomplished. But from that day on, Maurice has been so willing to not just push beyond what he’s done, but to also pass it on to other kids, as well.

….That sure made teaching the 60 other kids metalsmithing way easier.